By another friend David, AKA Jalfreziman, many thanks!
Please note scenic images are from Applecross Photographic Gallery (website), many thanks! 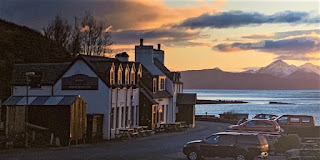 Applecross, Scotland. Where? I must confess, I hesitated about writing this little review. For 42 years, my wife (Management) & I (Jalfreziman) worked in tourism and catering. Daily we dealt with queues, screaming little darlings, noise and mayhem. When we wanted a holiday, we wanted peace, tranquility and above all, no screaming little darlings. It helped that we had to take our holiflops out of season. We found our sanctuary in Applecross. So where is it? Miles from anywhere is the answer, on the west coast of the Scottish Highlands, 100 miles north-west of Fort William, 80 miles west of Inverness. Don’t let those mileages fool you. The roads are nearly all mountainous and single-track with passing spaces. From Fort William, allow 3 hours and from Inverness, allow 2. And only if the weather’s good. If there’s ice or snow about, add to that quite a wide safety margin. More about that in a mo. 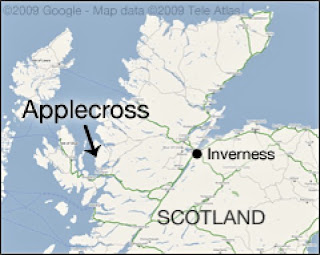 Many thanks to Google for the map

Rule one… don’t go in the summer. Too many people have discovered it and it’s loony-tunes time. Add to that the famous west coast Scotland summer midges. Go off season. We usually go early November when the great unwashed have cleared off. And yes, it’s a gamble with the weather but we’ve always been lucky. And that’s why I hesitated to write this. We don’t really want to encourage more visitors to go then. We want to keep it all to ourselves. So, Applecross. The village where the pub is, is usually what people call ‘Applecross’ but the name really applies to the whole peninsular, about 25 miles by 15 miles and sparsely populated. 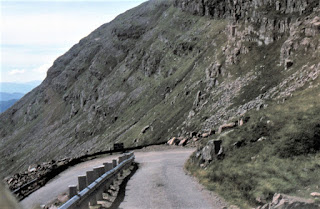 Until the 1970’s, the only way in was over the Bealach na Bà, a mountainous winding road first built in 1822 and is engineered similarly to roads through the great mountain passes in the Alps, with very tight hairpin bends that switch back and forth up the hillside and gradients that approach 20%. It has the steepest ascent of any road climb in the UK, rising from sea level at Applecross to 626 metres (2,054 ft), and is the third highest road in Scotland. The name is Scottish Gaelic for ‘Pass of the Cattle’, as it was historically used as a drovers' road. The Bealach, as it is known for short, is considered unsuitable for learner drivers, large vehicles and motorhomes. The route is often impassable in winter. Consequently, before the ‘70s, Applecross was frequently cut off in the winter, with access from the sea only. In the 70s, a coastal road was constructed around the north coast of the peninsular, which adds nearly 30 miles to the journey and is in itself ‘a bit of a challenge’.

View from the pub across Applecross Bay

Anyway, you get there one way or another. What is there? A fabulous coastline; views across the bay to Raasay and the Isle of Skye behind it, usually with snow on the peaks in November; wonderful, clean air; fabulous walks; otters; deer; highland cows wandering down the road; lovely, warm, welcoming people - and THE PUB! The Applecross Inn (website) is the only pub, literally for miles. It has justiﬁably won awards for its food, particularly the local game, crab & langoustines, the latter of which are caught in the bay daily and served fresh in the pub the same night. 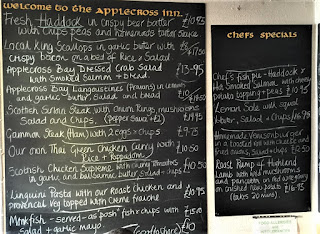 The pub does accommodation (7 rooms). (Always try and get room 7 - it’s the nicest and quietest). The views are stunning. The bar is small with limited seating and with a roaring log ﬁre in the winter. You can’t book a table for food (unless you’re a resident) but it doesn’t seem to matter, they always seem to be able to squeeze you in somewhere. In the summer there is outside seating aplenty, right on the beach. Over the years, the menu has changed little but then, if it ain’t broke, don’t ﬁx it! The specials change daily and if you get the chance, try the haddock, highland lamb, venison, haggis or (only seen once), calves liver. Yum!

Now here’s a negative… (or at least it was), the beer. For years, the only ale on offer was Skye Red (4.2%, brewery website), which frankly is down there with Doombar in the ‘don’t bother’ department. But in 2019, things have changed! Check out the Applecross Craft Brewery at 5 Camusterrach Place, Camusterrach, Applecross, Strathcarron, Wester Ross, IV54 8LQ, whose beer brewing is much better than their website maintenance (never yet been able to successfully access it). Anyway, Google it yourself and see how you get on. The beer though is a huge improvement on Skye Red. 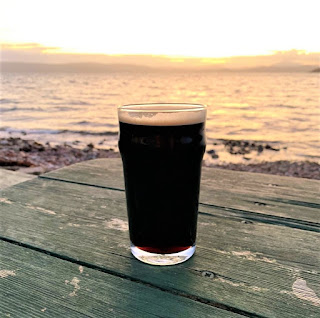 I promised myself I’d try all three of the main brews but after my ﬁrst pint of Applecross Inner Sound (4.7%), the dark ale, I was hooked. I never did try the other two but I’m reliably informed they are very good. The dark ale is as you would expect… nutty, malty, very tasty! One is not enough so get someone else to drive. Excellent beer and a stunning location.

The other two ales on offer are Applecross Sanctuary Red Ale (4.0%) and Applecross Pale Ale (3.7%). It’s good to see the local pubs and restaurants supporting the local brewery. We did even spot them on sale in Portree on the Isle of Skye but at an eye-watering price of £6.70 per bottle. And yes, you can buy them by the bottle from the Applecross Inn as well (at a much more reasonable price).

So that’s it! Applecross, Applecross Bay and the Applecross Inn. Don’t go there. It’s crap (ed: I love satire too!). Stay away (at least in November when we’re there).

Posted by Steve the Beermeister at 04:00

Steve the Beermeister
I do like drinking real ale, and going to new villages, town and cities and visiting their pubs...